The city of Istanbul is one of the most fascinating cities in the world. Home to Ancient Byzantium and Constantinople is a huge and popular transcontinental city that has been the capital of two empires and one republic and numerous ancient civilizations through the history, although from 1923 it gave that honor to Ankara.

Istanbul is a city full of buildings, monuments and places that tell us an endless number of stories that help us, in turn, to understand the reason for this picturesque city, and the reason for its plurality and mix of styles. Museums are one of those places where the visitor can delve into the history of Istanbul, and travel back in time through objects and vestiges.

Also, there are other museums and cultural institutions that help us understand Istanbul from other points of view. These are the most interesting museums:

The catalog of works at the Istanbul Archaeological Museum comprises nearly a million artifacts from all of these civilizations, including those that lived in the Anatolian, Balkan, Mesopotamian, Arabian Peninsula, and African regions.

This museum is one of the most important archeology museums in the world, and one of the first 10 to be built for this specific purpose. The collections are divided into three sections: the Archaeological Museum, the Museum of Ancient Oriental Artifacts, and the Ceramic Pavilion.

The main building of the Archaeological Museum, in neoclassical style, was designed by Alexandre Vallaury who, it is said, was inspired by the sarcophagus of Alexander the Great, which is part of the permanent collection. On the upper floor you can see vases, terracotta statues, coins, medals and rings.

On the lower floor are statues and sculptures that span periods from antiquity to the Byzantine Empire, as well as works of great historical importance, such as the sarcophagi of Alexander the Great, the sarcophagus of the Lloronas, the Lycian, the Satrap and Tabnit (King of Sidon); and the Inscription of Siloam, the oldest Hebrew text written in the Phoenician alphabet.

The current Museum of Oriental Art was built in 1883 as an Academy of Fine Arts, also created by Osman Hamdi Bey, and later converted into a museum. Objects from Mesopotamia, Anatolia, Arabia and Egypt are exhibited in this section, including a collection of 75 tablets.

The pottery pavilion was built in 1472, during the reign of Fatih Sultan Mehmed, to be used as a pavilion, and was later converted into a museum. An interesting collection of Turkish tiles is exhibited, and around 200 porcelains from the Seljuk and Ottoman eras.

The museum’s collection is then divided into three different parts:

Oriental Art: Here you can see Ottoman tombs and vestiges of archaic historical times, such as Sumerian or Egyptian. The most important object in the collection are the remains of the Babylonian Gate of Istar.

Ceramics and jewels: it is located in the Pavilion of Tiles, and the building itself is wonderful.

Archeology Museum: There are very important objects, such as the collection of sarcophagi, among which is the Alexander Sarcophagus.

TOPKAPI PALACE
Topkapi Palace is one of the most famous museums in Sultanahmet, and one of the largest and oldest in the world. It was built in the XV century, in the Ottoman period. When Sultan Mehmed made Istanbul the capital of the empire, he ordered the construction of this palace, which began in 1470, along with that of the 5-kilometer-long wall that surrounds an area of 700 m2.

The Topkapi Palace was both the residence of the sultan and his family, and the seat of government, which is why the different ministries and councils functioned there. The palace also housed the Imperial Treasury, the Imperial Archives, the mint, the harem of the sultans, and teaching pavilions.

After the establishment of the Republic, the palace was turned into a museum. In the first courtyard, accessed through the Sultan’s Gate (Bab-i Hümayun), are the Museum of Archeology, the Pavilion of Tiles, from 1472, and the guard rooms. 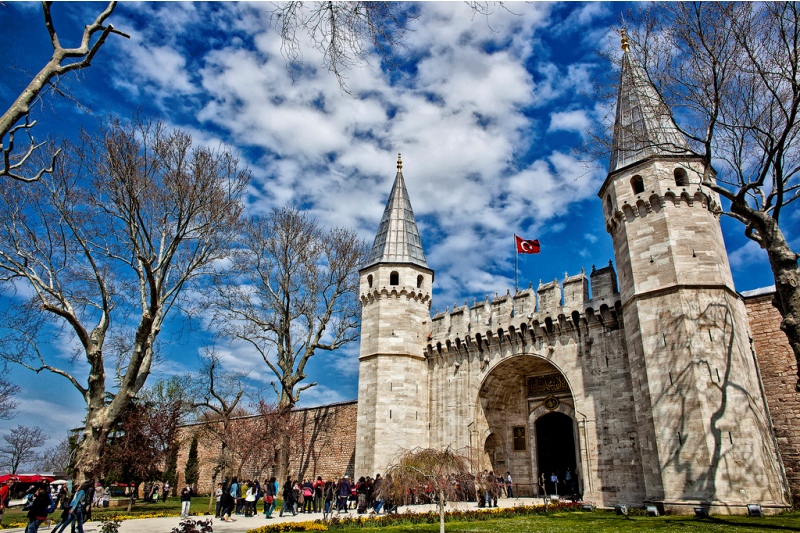 The Harem
The Harem was the area of ​​the palace where the mother, wives and concubines of the sultan resided. It has 400 rooms, linked by corridors, and completely isolated from the outside world. During the visit to the palace we will be able to see some rooms, the bathrooms, and the sultan’s hall, decorated with tiles, with its swimming pool and its fountain.

Boardroom
The Council Chamber was the place where the Grand Vizier met with the government cabinet. The sultan was not allowed to attend these meetings, although he could hear everything that was happening. This section houses a large collection of weapons from different eras, some used by the Turkish army, others received as gifts.

The Third Courtyard was deprived of the sultan. It was accessed through the Gate of Happiness and nobody could enter without an invitation.

Since the 15th century, the costumes used by the Ottoman dynasty have been kept in chests, which we can see on display.

The treasure
The Treasury of the palace is made up of jewels from different periods, some Turkish, others brought from different parts of the world: medals, chandeliers, ceremonial lamps, ornamental jewels, daggers and, the most important piece, the Qashikgy- Kaşıkçı diamond, one of the largest of the world.

In addition, it has some of the most valuable objects in the world, such as the spoon diamond or the topkapi dagger, which is the most expensive weapon in the world with embedded emeralds.

How to visit this area better?
Visit Topkapi Palace and many other places of interest, such as the Blue Mosque, Hagia Sophia or the Hippodrome of Constantinople, and learn everything with the help of an expert guide who will tell you about the most interesting facts about all of them. In addition, our guided tours for Istanbul includes transfers, skip-the-line visits, and lunch in a typical place so that you can delight in the local cuisine

The Museum of Turkish and Islamic Art

This 16th century stone palace was a gift from Sultan Süleyman to his Grand Vizier İbrahim Pasha. Upon Ibrahim’s death, it continued to be the official residence of viziers, ambassadors, and ministers. What were the ceremonial room and second patio, are used today as a museum.

The Collection
The museum houses a collection of rugs unmatched anywhere else. There are also around 15,000 manuscripts ranging from the 8th to the 19th century, stone, ceramic, wood and metal objects, typical tents used by nomadic Turks, or 10th century glass.

In total it houses a collection of more than 40,000 objects of such varied categories ranging from rugs to ceramics, sarcophagi or even different versions of the Koran.

One of the most interesting collections is that of the Seljuk era tombstones, which make up a veritable display of non-traditional illustrations, depicting griffins, dragons and other mythological creatures.

Tip: the museum is very well treated and has an interesting museum discourse, let yourself be seduced by its objects. On the other hand, on the terrace you will get magnificent views of the Blue Mosque, where you can have a drink to rest from the intense day of cultural visits.

Miniaturk is a famous miniature park located in the city of Istanbul, ideal to go with family or children. Here, you will be able to see the main monuments and tourist attractions of the city at scale, through models taken care of in detail and distributed along an interesting and productive tour. Among other miniatures, you will see:

But the museum doesn’t show miniatures just of Istanbul’s most important historical buildings. You can also see other scale models of buildings related to the culture of Turkey, such as traditional houses from different regions of the country or imposing mausoleums.

Crystal Museum
The visit to the Miniaturk can be complemented by another visit to the Crystal Museum, where you can delight yourself with crystal figures of the most beautiful monuments in Istanbul, illuminated in a beautiful and very colorful way thanks to laser technology.