Uskudar is one of the richest districts of Istanbul in terms of places to visit. This historical settlement is surrounded by the Bosphorus, Kadıköy, Beykoz and Ümraniye. Üsküdar, also known as “Scutari”, takes its name from the Scutarion Palace located opposite the Maiden’s Tower. Another name for the district is “Old Dar” given by Evliya Çelebi. Phoenicians, Megarians, Romans, Athens and Spartans lived in Üsküdar, which changed hands many times after it started to be used as a settlement. After being looted during the Crusades, it remained under the rule of the Latin civilization for a while. During the Seljuk period, the Turks meet Üsküdar. 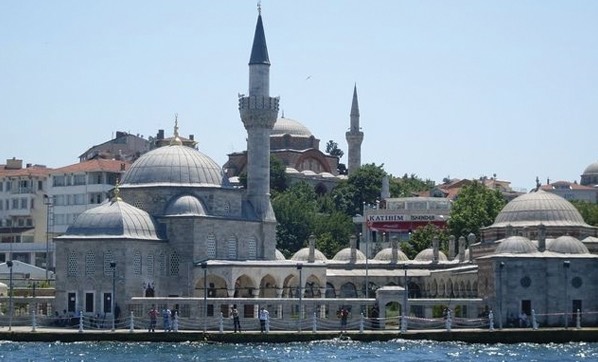 Uskudar Attractions
Üsküdar, the last stopover point for those coming from Anatolia, is also known for being the accommodation point of the sultans. Üsküdar is the beginning of the Byzantine commercial routes to Asia and has preserved its importance with historical and architectural elements that have been enriched for centuries.

It is one of the most popular travel destinations in Istanbul, with many architectural, historical and cultural masterpieces built here, especially during the Ottoman period.

In addition to its historical and architectural richness, it is also known for its natural richness where green and blue meet. Üsküdar is very rich in terms of places to visit and some of these places are:

The Maiden’s Tower, one of the most important places in our list of places to visit in Üsküdar, is one of the symbols of Istanbul. The tower is located on a small rock, at the junction of the Bosphorus and the Sea of ​​Marmara, 180 meters from the land.

There are many rumors about the construction and existence of this tower. The rock BC. It is known that it was built by an Athenian commander in the 5th century for protection purposes, then it was used for purposes such as a lighthouse with the construction of the tower, the reception point for shootings, it was used as a quarantine hospital for a period, and it was used by the Naval Forces Command at the beginning of the 20th century.

The most famous legend about the Maiden’s Tower is that the Eastern Roman Emperor dreamed that his daughter would die as a result of a snake bite and he had this tower built in the middle of the sea to prevent this. After the renovation works carried out in the 2000s, the tower has been transformed into a restaurant, cafeteria and a place where souvenirs are sold.

It is possible to reach the tower by ring services. Even if you can’t go to the Maiden’s Tower, you can enjoy the view and this unique atmosphere by having a drink at the cafes by the sea.

The New Mosque, one of the most beautiful mosques in Istanbul, is also known as the Valide Sultan Mosque. Between 1708 and 1710, III. It was built for Ahmet’s mother, Gülnuş Emetullah Valide Sultan.

The reason why both Ottoman and baroque features are seen in terms of architecture is that it was built in one of the transition periods of Ottoman architecture.

The mosque has two minarets and each minaret has three balconies. Iznik tiles used in the interior of the building create a magnificent atmosphere. (Hakimiyet-i Milliye Caddesi, Üsküdar.)

III. Ahmet Fountain is one of the important structures of our list of places to visit in Istanbul. The fountain in İskele Square was built by Mehmet Ağa between 1703 and 1730. The fountain, which was built by the sea, was moved to its present location over time.

III. Ahmet Fountain was repaired in 1932 and 1955. Famous verses of Poet Nedim, Şakir, and Crimean Mustafa can be seen on this historical building. The fountain, built with Rococo architecture, is in the form of a fountain, not a fountain.

The Mihrimah Sultan Complex and Mosque

The Mihrimah Sultan Complex and Mosque, designed by Mimar Sinan, is located across Üsküdar Pier Square. III. The structure behind the Ahmet Fountain was built between 1546 and 1548 by Mihrimah Sultan, the daughter of Suleiman the Magnificent.

There are mosque, madrasah, school, soup kitchen, inn and tomb sections in the building. The tombs of Mihrimah Sultan’s sons, Grand Vizier İbrahim Ethem and Kaptan-ı Derya Sinan Pasha can also be seen within the complex and mosque.

One of the smallest mosques in Istanbul. Although it is small, it is one of the most beautiful mosques in the city due to its architecture and location. Standing like precise gem by the Bosphorus. You definitely have your tea and watch the beauty of Bosphorus and Istanbul from this angle.

It was built in 1580 by Mimar Sinan for Şemsi Ahmet Pasha. There are madrasas on both sides of the Şemsi Paşa Mosque on the Bosphorus. (Coastal Road, Üsküdar)

Selimiye Barracks is one of the places that comes to mind when Üsküdar is mentioned. The barracks on the Üsküdar hills are square in shape. III. It got this name because it was built by Selim.

The only part of the barracks that is open to visitors is the rooms used by the famous Florence Nightingale, who treated British soldiers during the Crimean War in the 18th century, into a museum.

Çamlıca Hill, which is one of the popular places to visit in Üsküdar, consists of two hills, Küçük Çamlıca and Büyük Çamlıca. The 262 and 228 meter high hills are among the most beautiful places to watch the city view of Istanbul.

Çamlıca Hill, which has always been popular, has been a source of inspiration for poets, the subject of literary works, and the set of films. Many famous literary figures such as Procopius, Evliya Çelebi, Lord Byron and Lady Mary Wortley Montagu have mentioned Çamlıca Hill in their works. You can relax in cafes and restaurants on the hill, which is one of the natural spots of the city, and Topkapı, Cihannüma and Sofa Mansions on Küçük Çamlıca Hill are worth seeing.

(Kısıklı District. Çamlıca Hill 34398 Üsküdar. You can take many buses departing from Üsküdar or 129T bus from Taksim, get off at Çamlıca stop and walk to the hill. If you come to the hill with your private vehicle, you must leave your vehicle in the paid parking lot on the hill. )

Other Places to Visit in Üsküdar
If you have enough time in Üsküdar, you can add the following places to the list of places to visit in Üsküdar: Ayazma Mosque, Rum Mehmed Pasha Mosque, Ahmediye Mosque, Salacak Mosque, Şakirin Mosque, Abdülaziz Hunting Lodge, Çamlıca Girls’ High School.

When you go to Üsküdar, you will see that there are many baths. Şifa Bath, Valide Atik Bath, Bulgurlu Bath and Ağa Bath. Going to these baths is an alternative to things to do. It is also recommended to taste dry beans at Çömlek restaurant in Büyük Çamlıca, quince dessert and ice cream at Kanaat Restaurant on Selmanipak Street, and taste iskender at Niyazibey in Ahmediye Square.